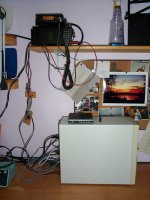 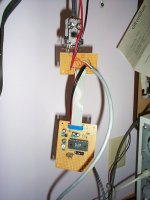 This is the first IRLP (Internet Radio Linking Project) node I built. The repeater frequency is 147.315 MHz, +600 kHz Offset. A tone of 192.8 Hz was required to access the repeater. The repeater callsign was VA3SLT and the IRLP node ID was 259.

The pictures show the temporary arrangement of the PC, radio, power supply and CTCSS tone board.

The CTCSS tone board was hacked together in an evening. Schematic details may be added when I produced a legible copy. The tone frequency was set to 192.8 Hz because anything below that frequency was rolled off by the audio amplifier in the FT-2200. CTCSS was necessary because the FT-2200 didn’t have an accessible COS signal and I wanted to avoid opening the radio.

The computer was an old Pentium 200 with 64MB RAM and a 2GB HDD running RedHat 7.1. The sound card was a Creative SB AWE64 ISA. The Kantronics KPC-3 powerd the APRS digipeater running on the same computer. Back then APRS and IRLP were on a timeshared basis since only one radio was available.

I had plans to modify a Motorola MOCOM-70 radio for IRLP use. I even purchased crystals for the old MOCOM-70. Unfortunately the transmitter in the MOCOM-70 would not tune to the amateur band so it was retired without ever being put to use.

The next IRLR endeavour was running IRLP on a small embedded board. I documented this adventure on the IRLP Embedded page..