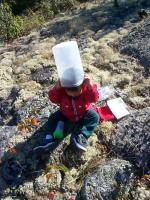 placed by Amber, Millie, and Scott. The official page for this cache is here.

Description This cache is located near Sioux Lookout on a hilltop of the now closed Pinetree Radar Base site.

The Story Sunday, September 29, 2002 started out as a dull and gray day. Everything indicated that this would be a rainy day. We had planned on a trip to Sioux Mountain. Apparently it is possible to get to Sioux Mountain across the railroad bridge. Walking down the tracks across a narrow bridge with a dog afraid of trains and a 2 year old child didn’t seem like a good idea, though. Instead we packed everybody into the van and drove off towards the old radar base site. We were prepared for a long walk and brought along pack sacks with lunch, drinks and warm clothes.

By time we arrived at the spot we planned to park the vehicle, the sky had cleared and the sun was laughing at us. What a change, blue skies! I turned on the GPS and entered the coordinated for this cache. Once the GPS had a lock, I was concerned. The distance didn’t seem right. I had been to Sioux Mountain during the winter via snowmobile. I remembered it to be much farther then what the GPS was trying to tell me. Not having been able to find the “4 Iowans Escape” cache previously didn’t give me much confidence. Maybe my GPS was defective?

Despite these concerns, we were here now, we started walking toward Sioux Mountain to find the cache. The road looked well travelled even though it had been washed out in places. After about Kilometer of walking we reached a small trail that branched off to the right off the main trail. The GPS placed the cache due right and not too far from where we were. So we followed the trail to an abondoned building that belongs to the Pintree Radar Base site. The Pintree Radar Base site is no longer in operation, it had been closed in 1987.

We were now within 30 Meters of the cache location. Jennifer was excited about finding the cache and walked off with the GPS in hand while I strolled around with Dakota on my shoulders. Dakota and I nearly stumbled over the cache container while Jennifer was looking for it in the opposite direction.

The cache looked vandalized, there was the container, the lid a few feet away and I couldn’t see any contents. We were standing on a rock above the cache and waited for Jennifer to get closer and retrieve what could be salvaged.

Closer examination determined that a wild animal had found the cache. The container had puncture marks and a large crack down its side. The ziplock bag was torn and the notebook looked a bit rough. I think we found all the contents. I took the travel bug and left a couple of SIMMsticks behind. In my opinion they make great key fobs.

We are still learning about this Geocaching activity. An item to have with us the next time is a fresh new ziplock bag. Unfortunately all we had were bags with food in them. The remainds of the food would certainly attract wild animals again, so we placed everything in the damaged containers and left with hopes to return soon to at least waterproof the contents.

Even though this spot isn’t Sioux Mountain as I know it, it is beautiful. It has a view of Sioux Lookout, Pelican Lake and some other lake to the south. The terrain is fairly rugged and one has to be careful near the cache location. The are some steep cliffs and many loose bolders to trip over. We found a large flat rock with no dropoffs nearby to sit down and have lunch.

We decided to walk back to the vehicle instead of pressing onto Sioux Mountain. After all we met the one goal of finding the cache. Jennifer was still recovering from a recent cold or flu so the distance we walked was just right for her. The walk back was uneventful, except for having the pleasure of ejoying a wonderful day.

Next we plan on placing some caches of our own and place the travel bugs we retrieved in them. One of the anticipated locations will be Sioux Mountain and on the trip there we hope to do some maintenance on this cache.