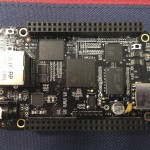 I am sharing the steps I performed here because I built a read-only root filesystem. It is not perfect as it throws a couple of errors during the boot sequence. But those errors are by no means fatal and can be ignored.

Same packages are needed in order to build.

Packages needed for the kernel build

The last command should provide this kind of output. Otherwise there is a library install issue.

Or get patched sources.

Upgrade device tree compiler package. If this script throws an error about ‘sudo: not found’, then just manual install those packages. Still need to run the script!

Get Kernel. (This isn’t really necessary as the next step would clone the kernel repo. But I wanted a local kernel repo for other tasks, too.)

Get the kernel build scripts.

Edit the script to clone out local kernel repo. Edit the following lines to read like this:

We are using a HD partition to experiment. Be careful here and be sure what disk device you are using. Very easy to nuke the local filesystem and require a rebuild of the build machine.

This is what we want.

Be done with SD card.

After system is installed

Boot Beaglebone Black with the new SD card. Use the serial console cable to access the root prompt. The username/password are root/root.

To make permanent changes the root filesystem needs to be mounted read-write. This is easily done: